Location of our airport hotel near Cologne 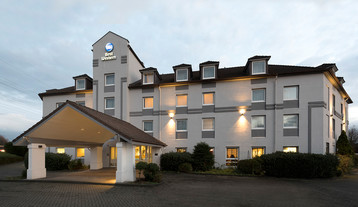 Troisdorf town centre is within easy walking distance or a short bus ride from our airport hotel near Cologne. Here you can shop, enjoy a game of ten-pin bowling, go to the cinema or simply wander through the charming narrow streets. Major businesses such as the “Deutsche Post” are also based here. For those in search of relaxation or recreational sports, numerous hiking paths and cycle tracks can be found in the nearby nature reserves of “Wahner Heide” and the “Sieg” flood plains.

The Best Western Hotel Cologne Airport Troisdorf is ideal for visitors to Cologne and Bonn. The hotel is directly linked to the airport via the A59 motorway and is only a few kilometres away from the commercial centre of Troisdorf. Buses depart from the bus stop (route 501) directly next to the hotel every 10-15 minutes; the local railway station is a 10-minute bus ride away.

From the direction of Cologne:

On the A59 motorway heading towards Bonn, take exit 38 signposted to Troisdorf/Mondorf. As soon as you leave the motorway, you will see our hotel on the left. There are sufficient on-site parking spaces, 2 of which feature a charging station for electric vehicles.

From the direction of Bonn:

When heading towards Cologne on the A59 motorway, take exit 38 signposted to Troisdorf/Mondorf. Turn right at the next traffic light. The Best Western Hotel Cologne Airport Troisdorf is situated around 50 m further along the road on the left.

From Cologne Bonn Airport, you can simply take a taxi to the hotel in Troisdorf for approx. € 28.00. Alternatively, take the S-Bahn (suburban railway S13) to the stop called “Troisdorf”, followed by bus no. 501 in the direction of “Lülsdorf”. Get off at the stop called “Feuerwache Sieglar”, which is only about 200 m away from the hotel.

Our guests are welcome to use the hotel car park for a fee of € 6,50 per full day.

From Cologne’s main railway station, you can get to our hotel in Troisdorf by public transport in around 30 minutes. Take the suburban railway S12 or S13 in the direction of Sieg/Au. Get off at the stop called “Troisdorf”. Then take bus no. 501 towards “Lülsdorf”. Get off at the stop called “Feuerwache Sieglar”. The Best Western Hotel Cologne Airport Troisdorf is only around 200 m away.